The ZR950JC doing what it does best. 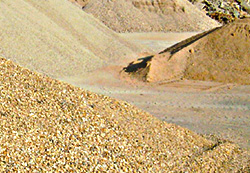 A sample of the range of finished products produced by Jackson’s.

Jackson’s Earthmoving is a long standing business, originally involved with road construction in the mountain areas of North East Victoria. Still family run, current owners Trevor and Roberta Jackson are now joined by their son Wylie, who makes it a fifth generation affair.

Beginning with one excavator, the present day business has expanded from a general earthworks civil contractor into concrete recycling with a total staff of six employees.

Trevor’s passion for concrete recycling began in 1997. It took him a great deal of patience educating the community of the advantages of recycling and the quality of product that was produced. While it was a long path, it was definitely worthwhile, as recycled concrete is now used in the road making process.

Jackson’s Earthmoving produces twelve classes of product at their Wodonga operation, with the most popular being the 14mm minus product, that comes in various colours for different looks.

Trevor was first approached by Hitachi Construction Machinery (Australia) in April 2008 to undertake a ZR950JC demonstration. The efficiency of the machine so impressed the crew, son Wylie and fellow staffer Dean Walsh said “We want one of these crushers!” It was only a matter of time before the new crusher was on the agenda to replace their Nordberg LT80J unit.

With the help of Ryan Kubota-san from Hitachi Construction Machinery in Japan, we were able to make a number of local adjustments to the machine, such as an additional Scraper Bar (to reduce the fines build up) and a Belt Protection Plate installed under the Jaws (which bends any reo bar present in the concrete before it strikes the conveyor belt).

Delivery of the ZR950JC was taken on January 19, 2009, with the settlement arranged by Zaxis Finance. The crusher was immediately put to work, crushing 9000m3 of rock at the local council’s quarry for a recently won contract, while also recycling the concrete collected at their landfill.

Trevor said “the beauty of the machine is its transportability to where the raw material is stockpiled, and they [the local council] are very impressed with the quietness of the crusher, hence keeping the neighbourhood happy”.

Trevor believes Hitachi Construction Machinery (Australia) stands by their product, and believes they’ve made headway into the Australian market with this, the first crusher sold.

— “We hope to prove them right and if early indications have any bearing, production from the ZR950JC has improved by 40% per hour, our association with Hitachi is sure to be strong for many years to come” Trevor said. — 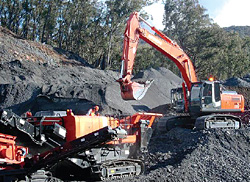 *Duplicate of articles shown is prohibited without permission.

*The machines may not meet the regulations depending on countries.

Send Us an E-mail