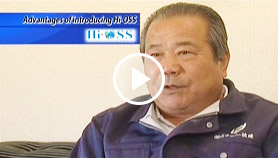 “At the end of last year, before introducing new equipment to the worksite, we decided to conduct an on-site test in order to compare product functionality. We had two machinery manufacturers prepare processing lines that incorporated crusher and screen equipment. Into each of these lines we fed pre-processed concrete rubble (raw material) that had been generated on-site. The test itself involved having the processing lines, through crushing and sorting processes, output material of less than 40mm in diameter. The test result was that, in terms of producing one square meter (1m3) of reprocessed material, the Hitachi Construction Machinery Co., Ltd. processing line was some 11 seconds faster than the competitor line.
The difference in processing speeds between the lines was clearly apparent. Expressed in terms
of throughput, the Hitachi line could handle some 1.3 times more raw material than the competitor.
This is what made us decide on Hitachi.”

With regard to the company delivering the above evaluation, it is a business that normally has 6 or 7 worksites simultaneously in operation. It is an influential player in the Tokai Region whose main operations could be described as general demolitions. According to Mr.Hirofumi Murata, the company‘s CEO, it has operated both track mounted ZR950JC crushers and VR408 screens since the end of last year based on its evaluation of the testing outlined in the previous paragraph. The worksite mentioned above is a former shopping center in Nagoya‘s Nishi Ward. Demolition on this site commenced in August of last year. When we visited the site, in addition to a track mounted ZR950JC crusher and a VR408 screen, we found a total of some 17 pieces of machinery, these being equipped with a large range of attachments including steel frame cutters and (reducing) concrete crushers. There was also a HR420G track mounted crusher in operation at the large worksite.Starting with Aichi Prefecture, and including Nagoya City and Toyota City, etc., Mr.Hirofumi Murata‘s company has obtained the licenses required to engage in industrial waste collection and transportation from multiple surrounding municipalities. Traditionally, based on such certifications, a business would engage in concrete rubble / scrap metal removal to intermediate processing facilities. However, for a long time, Mr.Hirofumi Murata has focused on being a pioneer in the production of recycled materials on-site at demolition worksites, using self-developed track mounted crusher equipment, etc.“Although it very much depends on the worksite size, if the worksite is over 3,300 m2, then there are significant merits associated with introducing track-mounted recycling equipment, establishing plant on-site, and carrying out crushing / recycling operations on-site. Such merits are not just limited to reducing the transportation costs associated with removing material off-site. Rather, there is also the merit of reducing CO2 emissions resulting from minimizing the number of dump trucks entering / leaving the worksite as part of transportation activities. Most importantly, however, the greatest merit of doing such work on-site is that it takes into consideration the environment enjoyed by residents neighboring the worksite.

Furthermore, as in the current instance, through introducing systems that offer quicker processing, a shortening of the overall demolition timeline becomes possible, with such a shortening of the timeline resulting in a reduction of the total number of on-site operational hours, which in turn offers expectations regarding reducing the overall Co2 emission levels of recycling machinery.” (Mr.Hirofumi Murata)

“The products themselves are really good. however, I also evaluate Hitachi Construction

Machinery strongly as a company. Their response to service and maintenance requests is swift. They possess an agility that allows them to move quickly.”

While considering the merits of such developments to be obvious, Mr.Hirofumi Murata added this, “Being able to produce recycled materials on-site at demolition sites is also a strong / effective piece of public relations (PR) for the company ordering our services.” With regard to the worksite discussed in this article, the majority of concrete rubble generated through building demolitions was crushed on-site, it then being recycled and used on-site as both coverage gravel, and as a subgrade strengthener. This in itself promoted the cause of zero emissions.

“For general contractors, who tend to perform all phases of a project from demolition of previous structures through to construction work, with regard to materials required to strengthen subgrades to the levels necessary for new structures, we supply general contractors with construction byproducts that are recycled in the course of our own demolition work. In addition to contributing to the environment, using such products also delivers economic merits to general contractors. Also, the granularity of product created by ZR950JC crushers and VR408 screens is high, with this equipment delivering material of a much better quality than normal recycled product.” (Mr.Hirofumi Murata) A processing line comprised of a ZR950JC crusher and a VR408 screen (right rear). As their compact body lines show, both machines offer high levels of processing functionality.

(Left) Feeding raw material to the ZR950JC that has been pulverized into rubble in advance.
(Center) After crushing, material is fed to the VR408 by the ZR950JC discharge conveyor, and the VR408 sorts product into that which is less than / over 40mm in diameter.
(Right) Scrap metal that has been separated out using the ZR950JC magnetic separator.

With regard to the line-process on the Nagoya shopping center demolition worksite, raw material that has been processed into rubble in advance using a pulverizer is fed into the crusher using a hydraulic excavator. After crushing, rubble is sorted into product less than / over 40mm in diameter using the screen. Product that is still over 40mm is re-fed into the crusher. Using a suspended magnetic separator that hangs from the permanent-magnetic selector, that is provided standard on the ZR950JC, scrap metal, etc. can also be efficiently removed from product. At the current time, based on the calculation of 8 hours operation each day, approximately 670m3 of material can be processed per day. To put this in another way, Mr.Hirofumi Murata evaluates the crushing speed of the ZR950JC very highly, considering it to be some “2.5 times faster than traditional equipment.” With regard to such capabilities, Ms.Fujiko Toyota, who is responsible for using an excavator to feed the crusher, offers the following comment:

“On this project, it is planned that the timeline will run until August of this year. Then again, if we did not have the ZR950JC operating, considering the worksite size, during the final phases of the project we would just be left with crushing and recycling work. In reality, however, due to the crushing speed of the ZR950JC, such finishing-up work will not be created in the first place. Furthermore, through combining this unit with a screen, it becomes very easy to organize product based on size after recycling has been completed. As such, a shortening of the overall demolition timeline becomes possible.” (Ms.Fujiko Toyota)

Furthermore, as the person responsible for feeding the crusher, Ms.Fujiko Toyota commented that “stress had been removed” from her job. Indeed, she evaluated the ZR950JC “self recovery function” highly. When uncrushable material is fed into the crusher chamber, an opening along the crusher conveyor belt is automatically opened and such material ejected. After ejection, the function works to return the opening along the conveyor belt to a preset width.

“Traditionally, because there was always the worry of the crusher being damaged by uncrushable materials such as metallic masses (present within the feed), the crusher itself was sometimes temporarily stopped in order to remove such material manually. Just doing this tended to slow work down. Furthermore, we tended to take a very serious approach to confirming as to whether or not there were any uncrushable materials mixed in with the raw material feed, prior to it being fed into the crusher. However, this self-recovery function addresses these issues. As such, I think we can now get on with work without really worrying about things.” (Ms.Fujiko Toyota)

Ms.Fujiko Toyota, who is responsible for feeding the ZR950JC crusher, “Because crushing

speed has greatly increased over what traditional machinery offers, feeding work seems to be the only thing I do” (laughing).

Considering the size of the former shopping center demolition site, a significant “environmental burden” could be imagined due to the large volumes of waste created. However, this same demolition industry-pioneering company has turned the worksite into one of “environmental contribution” through its introduction of Hitachi On-site Screening & Solution (Hi-OSS) processes, which have been delivered courtesy of the mobility of track-mounted equipment.“Consideration has been shown towards residents neighboring the worksite through minimizing dump truck numbers entering / leaving the worksite. By achieving this, we have delivered something to the surrounding community whose merit cannot be expressed in mere monetary terms.” (Mr.Hirofumi Murata)

These two pieces of machinery, which represent the core of the processing line, worked relentlessly at full capacity when we visited the worksite.

*For more information, please contact us (Hitachi Construction Machinery).
*Duplicate of articles shown is prohibited without permission.
*The machines may not meet the regulations depending on countries.