The visit was recommended by Congresswoman Virginia Foxx (R-NC), and arranged as the appreciation of that company’s contribution to employment in the area amid achieving solid business results as well as its aggressive efforts in support of the Hurricane Katrina disaster.

President Bush arrived at 12:45 p.m. with Treasury Secretary John Snow, Secretary of Commerce Carlos Guiterrez as well as U.S. Senator Richard Burr (R-NC), and showed great interest in the factory over the succeeding 20 minutes. On a podium before 700 employees and others, President Bush gave a 45-minute speech that covered a broad spectrum of topics such as the U.S. economy, taxes program and health care. Within his speech, he touched on that Deere-Hitachi is a good example as a successful joint venture between the two parent companies, and expressed his gratitude to representatives of both John Deere and Deere-Hitachi, including General Manager, America Business Division Hitoshi Manabe, who greeted him on behalf of Hitachi Construction Machinery. (photo)

The speech ended with the President shaking hands with each employee, and after signing some autographs, he visited with a Deere-Hitachi employee who had lost a son in Iraq. He then left the factory at around 2:15 p.m. 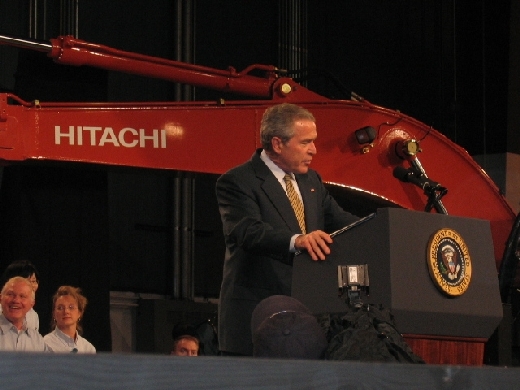