Since their release in January 2008, the EX5500-6 and the EX2500-6, as well as our company’s other ultra-large hydraulic excavators, the EX8000-6, EX3600-6 and EX1900-6, have been highly valued by global mining customers, including major mining companies, for their production and high availability, based on reliability. On the other hand, based on the recent market trend of increasing resource demands, further increased production of ultra-large hydraulic excavators, which tackle excavation and loading works, has also been requested, as well as increased transporting capacity for the dump trucks used to convey the excavated ore etc.

The backhoe type EX5600-6 and EX2600-6 follow the design policy of proven original machines. The bucket capacity has been upsized from the original 29 m3 to 34m3 for the EX5600-6 and from 15 m3 to 17 m3 for the EX2600-6 in addition to shortening the reach of the front attachment; achieving a large production with a cycle time equivalent to original machines by boosting the engine output while keeping the reliability and durability of the structures. As a result, in the case of the backhoe type EX5600-6, the number of bucket passes required to fill a dump truck with a nominal payload of 220 tons became four rather than five original machines, significantly increasing the production efficiency by shortening of the loading time.

Also, regarding the electrical motor-driven type ultra-large hydraulic excavators, which are shipped steadily, mainly to Russia, the CIS countries and China, due to the excellent versatility of the operational work they allow compared with electrical motor-driven mechanical cable type excavators and the availability of existing power supply facilities, the model change of the 550 and 250 ton class models will be conducted sequentially to enrich the series. Also, in the case of the operation site, where relatively low cost electric power can be utilized in relation to the recent rising cost of crude oil, sales to newly developed mines or North/Latin America markets will be promoted using the above fact as a selling point.
Total sales of the two models, including both engine types and the electrical motor, are expected to reach 100 machines a year.

5.Measures for the operating environment

6.Harmonization with the mine management system 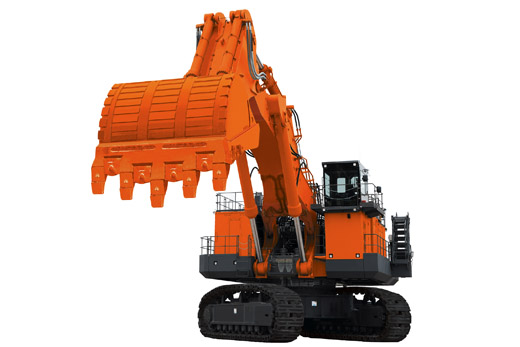 Please note that the descriptions in the news release, which are information valid as of the date of issue, may be subject to change without notice.