The two rigid dump truck models are equipped with an AC drive system that was developed with Hitachi Group technologies employed in conventional models. This time around we improved the AC drive system with various sensors that provide information on drive conditions. The result is the Hitachi Drive Control System which reduces tire slippage on acceleration and tire lock-up during braking, and prevents chassis oscillation in a front-rear direction and tire skid while steering.

In addition, to satisfy the request of customers worldwide, we are giving them the choice between engines from two different companies. This option will also be made available for the EH5000AC-3 rigid dump truck, which we launched back in February 2013.

The release of these two rigid dump truck models completes the lineup for the EH AC-3 series of dump trucks equipped with an AC drive system. Along with our ultra-large hydraulic excavators, for which we boast a high market share, we plan to supply these rigid dump truck models to contribute to the improvement of productivity at mines around the world.

The Hitachi Construction Machinery Group is at present embarking on the fortification of the mining business, which is a key policy in the mid-term management plan, GROW TOGETHER 2016. In addition to further fortifying our develop, sales, and support system for high value-added products, including an autonomous driving dump truck, and carrying out development of emerging markets, we are also making optimal recommendations for mining operations and machine management, mainly using mine management systems developed by Wenco International Mining Systems Ltd. Going forward we plan to continue strengthening the mining business by working with Hitachi Group companies, including Hitachi, Ltd. whose strength is in information and communication, and infrastructure technologies, and also aim to provide a “Reliable solutions” to our customers worldwide.

All units are SI international standards; those in square bracket are former standard units. 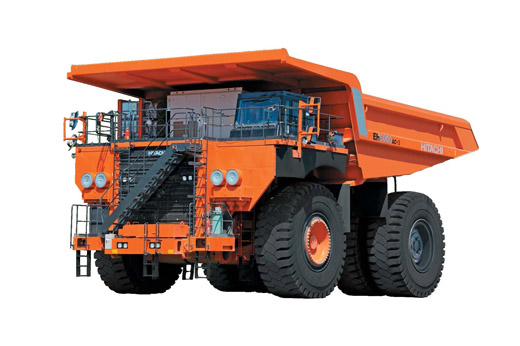 Information presented in this press release is valid as of the date of release; please note that information is subject to change without notice at a later date.