> Home > News > Topics > Commendation and Medal from the CMAC

Commendation and Medal from the CMAC

On December 8, 2016, Koji Sumioka, representative director of NPO Good Earth Japan (GEJ) and Executive Vice President of Hitachi Construction Machinery, visited Cambodia, where he was given a letter of commendation and presented with the Royal Order of Sahametrei (“Medal of friendship”) of the Kingdom of Cambodia by the Cambodia Mine Action Centre (CMAC).

Since its founding in March 2007, GEJ, which is fully backed by the Hitachi Construction Machinery Group, has been conducting activities to rebuild the lives of local villagers that reside in areas in Cambodia that have been cleared of landmines. The CMAC is an organization that works in cooperation with the GEJ locally. In addition to clearing landmines, the organization provides assistance to local villagers living in areas from which landmines have been removed.

This year was a milestone for GEJ as it marks the 10th year since it began its activities in Cambodia. The letter of commendation and medal of friendship were presented in appreciation for the assistance GEJ and Hitachi Construction Machinery have provided thus far. The presentation ceremony was held in Phnom Penh at CMAC headquarters. Mr. Heng Ratana, Delegate of the Royal Government In Charge as Director General of CMAC, expressed his thanks for the great contribution to villagers from the GEJ’s activities, after which he bestowed the letter of commendation and medal of friendship to Executive Vice President Sumioka.

In conjunction with the ceremony, CMAC gave a presentation on its landmine clearance activities thus far and explained its plans for the future. In addition, a meeting was held with Mr. Ratana and other officers to confirm the maintenance and strengthening of their cooperative relationship.

The Hitachi Construction Machinery Group pledges to continue to support the activities of GEJ going forward. 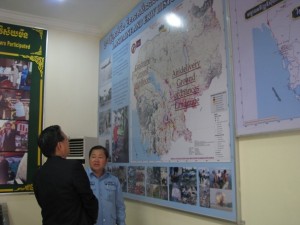