The 13th Hitachi Construction Machinery Festival was held at Tsuchiura Works on November 12th. The event is held to express our gratitude to local residents and all others who consistently offer their support and cooperation. The weather was perfect on the day of the event. Around 6,000 visitors, an all-time high, attended the festival.

There were many popular events. There was an area to display products, such as the hybrid hydraulic excavator ZH200-6, the ever-popular mini excavator that children could try out, and factory tours. The tours are given by bus and electric-powered carts. Many visitors also waited in anticipation for the annual all-you-can-stuff potatoes by the bag and charity game zone. All-in-all the festival was a great success.

On center stage, performances such as a magic show and squadron show greatly excited visitors. Local characters also lent their support to the delight of children. These included Uraha and Horoma from the town of Urahoro, Hokkaido where the Urahoro Test Site is located, Batamocchi from Kitaakita City, the home of Shintohoku Metal Co., Ltd, and Rey-kun, the football club mascot for Hitachi Kashiwa Reysol, who put in a special appearance this time.

At the convention hall, visitors were offered a cross-cultural experience, where they could take commemorative photos in the national costume of various countries and regions. Trainees of the human resources development program from China, India, and Indonesia also participated in the event. There was also an area to experience virtual reality, where trap shooting simulation was trialed for the first time and visitors could have a go at competing for the highest speed in cycling in the sports zone. Both events proved popular.

The day was filled with many smiles! 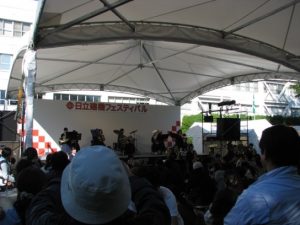 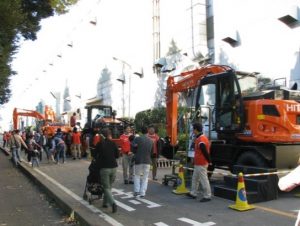 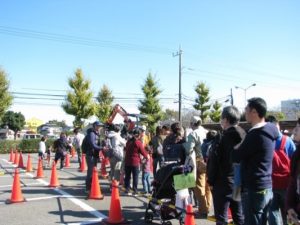 Visitors formed a long line at the mini excavator experience 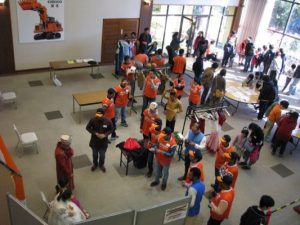 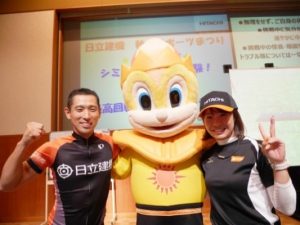 Company employee and para-cyclist Masaki Fujita (left) and trap shooter Yukie Nakayama (right), who both livened up the sports exhibit, strike a pose with Rey-kun (center)