Primary school handover ceremony in the village of Otakon, Cambodia 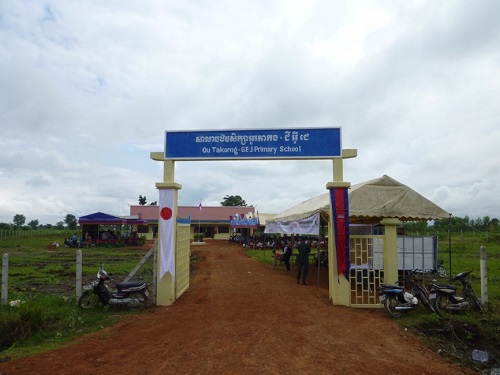 The primary school opening for the first time

On October 2, 2018, NPO Good Earth Japan (GEJ) held a ceremony to present the village of Otakon which is located in Battambang Province in the northwestern part of Cambodia, with a primary school that it was built with the support of the GEJ.

There is no primary school in Otakon Village therefore the 160 or so children have to commute to schools in surrounding villages. The closest primary school is the Kiesel Primary School, which was built by GEJ in 2009 in Russei Ro Village. The commute one-way is around 3 kilometers (roughly 2 miles) and is nearly a one hour trek. This is a long, harsh commute for the children who must endure Cambodia’s intense heat and muddy farm roads during the rainy season due to poor drainage. For this reason, the completion of the primary school was much-awaited by the villagers.

Construction on the primary school started in early April this year. The school’s foundation was temporarily flooded during the rainy season, but later work progressed according to plan, and after the building was completed, desks and other furnishings were brought in and the school grounds were completed.

The boisterous ceremony was attended by a total of 430 people, including Hirotoyo Fujii, Senior Vice President, Executive Officer of HCM and Representative Director of GEJ, along with H.E. Heng Ratana, Director General of the Cambodian Mine Action Centre (CMAC), the deputy governor of Battambang Province, government officials, CMAC staff, teachers, students, and villagers. The new school is set to open on November 1 at the beginning of the new school year.

The HCM Group is a supporter of GEJ’s activities. GEJ aims to improve the standard of living and independence of farmers living in areas of Cambodia that have been cleared of landmines. To this end, the GEJ’s activities focus on the development of an infrastructure, including the building of roads, and the creation of reservoirs necessary for daily life and irrigating farm lands. The Hitachi Construction Machinery Group
aims to continue to support the GEJ’s activities. The villagers gathered for the ceremony