ICQCC is an international convention for quality control circles held in Asia every year since 1976. This year, it was hosted in Singapore, with 470 teams and nearly 2,000 people participating from around the world to display the results of their everyday KAIZEN activities.

The FINAL DRIVES team achieved 1st place for toolbox installation method improvements at the National KAIZEN Conference held in the Republic of Zambia in February 2018, and passed the domestic Zambian final selection in July, before entering ICQCC as the first ever representatives from the Republic of Zambia. In fact, they are not only the first representatives from Zambia, but also the first ever participants from Africa as a whole.

After the teams presented their KAIZEN activities, three judges made judgments by team, and presented them with the star, gold, silver, and bronze awards. The FINAL DRIVES team received at least 70 out of 100 points from each of the judges (absolute evaluation scoring), and won the gold.

Hitachi Construction Machinery Zambia intends to use the high praise received at this world conference to spur continued KAIZEN efforts in the future.

※ Two teams from Zambia, participated in this ICQCC including our team from Final Drives. The other team, from a different company, also won a gold prize. 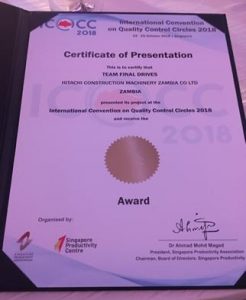