Hitachi Construction Machinery (Shanghai) Co., Ltd. (HCS) has been engaged in an afforestation program called “HCS Forest Projejct” in China’s Horqin Desert since 2005. This desert is located in the Inner Mongolia Autonomous Region of China. HCS entrusts this task to Ryokka (greening) Network, an environment-friendly non-governmental organization (NGO). The purpose of this project is to revegetate the desert caused in part by excessive cattle grazing. In order to prevent a recurrence, HCS has involved local residents take part in this project so as to encourage them to make a sustainable and effective use of the land.

No additional planting was carried out in fiscal 2011. As there had been a good rainfall until summer this year, pine trees that were planted in 2008 and 2009 grew up to around one meter in height. This was achieved by irrigating only once. Furthermore, the ratio of vegetation coverage* recovered up to 70 percent, and mowing was conducted during the reporting fiscal year. As a result, eight horse carriagefull of grasses were mowed. This is sufficient to feed four cows during winter season. Meanwhile, poplar trees, which act as windbreakers, in lands belonging to 40 households or 83% of all households, were pruned. The branches were collected and carried by 40 carriages to individual homes for use as fuels in winter season. This has resulted in a tangible benefit, it has led to an increased awareness of afforestation among the local residents.

In fiscal 2012, based on the judgment that too much pruning would not be good to maintain trees, we plan to halve the amount of pruning work as compared with fiscal 2011. It should also be noted that as the amount of grass has been growing, we will encourage local residents to graze cows. The East Harastai district in winter – Only the pine trees in the foreground are green. As sand hardened increasingly, wooden piles are being replaced by the concrete ones. The rows of poplar trees grew up to 6 meters in height. 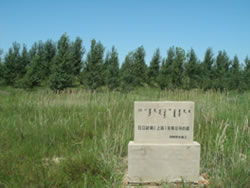 The “HCS Foerest Project” signboard was given a face lift. A photo taken when the afforestation project kicked off in 2005.