HCM won the 2003 “Miles Prize” and the “Miles Company Award, Main Prize”, awarded by the Society of Japanese Value Engineering.The “Miles Award” is presented to companies or departments that accomplished VE and make remarkable achievements. The “Miles Company Award, Main Prize” is awarded to companies or departments that have previously won the “Miles Award”, and have continuously developed VE activities with remarkable results. It is the Society’s top award. 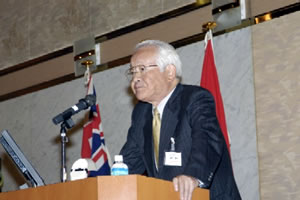 Reasons for the Prize Decision

HCM completed construction of its main factory in Tsuchiura in 1973. As part of their management reform, they introduced VE to the entire factory and achieved great results that fit their development plans and manufacturing. For these reasons, they won the “Miles Award” in 1984. Over the next 20 years, they responded to changes by expanding and actively using VE in the following areas: reforming products, developing new products, manufacturing, distribution, sales, service, and reforming in-company work. They had excellent results.

The following is a list of the characteristics of their achievement: 1.With management spearheading the movement, VE was placed at the core of administration ideas and techniques. In this way they developed various reform and improvement activities throughout the entire company. 2. They incorporated a VE budget into management plans, set a goal value for price reduction, and undertook VE in daily work. 3. They prepared a VE approach and tools for customer satisfaction, and had great results by expanding this approach throughout the company. 4. They advanced VE development, which had been merged with their administration system. They then introduced this system to their domestic and foreign sister companies, for which they are awaiting results. These were the reasons for the award decision.