> Home > News > Topics > Solidarity to the Victims of Java Earthquake

Solidarity to the Victims of Java Earthquake

Early in the morning 27 May 2006, the land of Jogjakarta and Central Jawa was shaking and wakening most of people over there, including some Hexindo’s staff and/or family who lived there, or who happened to be there because their visit during a long weekend. The earthquake on 5.9 scales of Richter destroyed most of the areas, and many cities suffered catastrophic damages with the death toll of more than 6,000 people.

In responding to the earthquake, Hexindo together with PT Hitachi Construction Machinery Indonesia (HCMI) had donated 1 unit of Hitachi hydraulic excavator ZX200, and 1 unit of Hitachi hydraulic excavator ZX330 in the value of US$ 200,000 to the Department of Public Work, so the machines can be utilized immediately to help the rehabilitation and reconstruction of damaged area. Operation and maintenance cost of these two units is being calculated. Represent the government was Mr. Roestam Sjarief the Secretary General of Department of Public Work, and from Hexindo was Mr. Toshiaki Takase, and from HCMI Mr. Shuji Sohma. Beside Hexindo and HCMI, some other Hitachi Group companies also participated in this Donation. They are:
1. Hitachi Asia Ltd., Jakarta Office
2. PT Hitachi Power Systems Indonesia
3. PT Hitachi Chemical Electronic Products Indonesia
4. PT Hitachi Consumer Products Indonesia
5. PT Sliontec Ekadharma Indonesia
6. PT Bukaka Forging Industries
7. Hitachi High Technologies IPC
8. PT Berdiri Matahari Logistic
9. PT Modern Hitachi Sales Indonesia 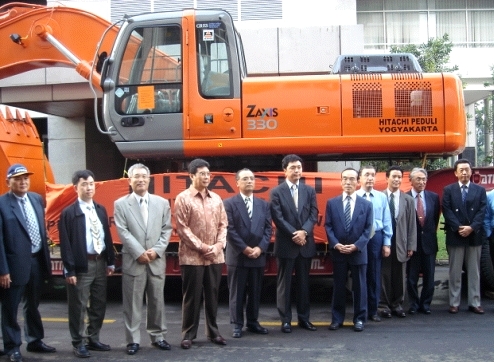 ZAXIS 330 and representatives of companies relating the donation.

Hexindo itself had donated Rp 78 million in the form of tents, stoves, blankets, 9 primary goods such as rice, cooking oil, etc. Other donation will be handed over via third independent institution or organization. The employees expressed their solidarity to their colleagues and collected about Rp 17 million. This sum of money dedicated to help the 17 listed staffs who family or closed relatives were suffered from the disaster, either the damage of the house or even worse the loss of their loved one/s. Provision of relief supplies for the earthquake victims.

Things Hexindo contributed might very small in term of the recovery of the suffering of our big family in Jogjakarta and Central Jawa. However with the help of God Almighty, the donation from Hexindo as well from other parties can provide something meaningful and a glimpse of smile to the victims at last.