Business activities are only made possible by having a healthy global environment and sustainable social development.
In order to place an emphasis on social contributions, the HCM Group created the “Hitachi Construction Machinery Group Social Contribution Policy” in FY2006.
Under this policy, the HCM Group is deeply aware of the fact that we are part of society, and in addition to participating in the resolution of social issues through business activities we also undertake initiatives to achieve an even better society through social contribution activities.

The breakdown of social contribution-related expenses in FY2020 is 65.0% for charitable donations, 31.5% for community investment, and 3.5% for commercial initiatives.

Our group solves problems in society through our business, and contributes to society as a good corporate citizen for a better society. Our group contributes to society by “Resolving global environmental issues”, “Enhancing initiatives to increase social infrastructure workforce”, “Contributing to community development”, making the most of our group features, with the understanding of local society.

HCA plans to continue to work with the Humpty Dumpty Foundation to carry out activities that put smiles on the faces of children in Australia. 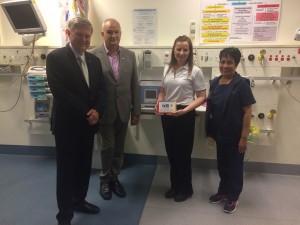 The municipal government of Heifei City in China’s Anhui Province has been implementing the Hefei City Project Hope since 1992 to support philanthropy that benefits youth. Many companies endorse this project and to date a number of different activities have been carried out.

In August 2017, Hitachi Construction Machinery (China) was given the Hefei City Project Hope award by the City of Hefei for these contributions to the community. Hitachi Construction Machinery (China) will continue to support the Hefei City Project Hope and provide assistance to youth, who represent our future. 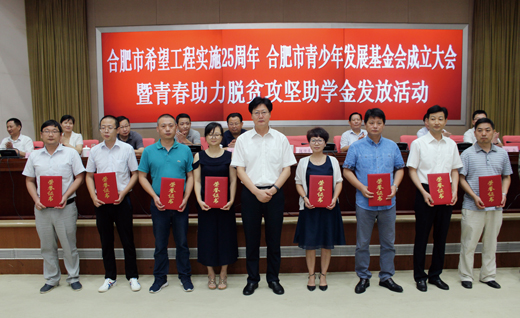 The Horqin Desert located in the Inner Mongolia Autonomous Region is the largest desert in China. Until about 20 years ago, most of the population lived a semi-agriculture and semi-animal husbandry lifestyle in which they farmed corn for animal feed while raising cows or goats on pasture land. However, the effects of drought completely transformed the once grassland into desert, resulting in serious issues such as a decline in agriculture and livestock productivity and growing damages caused by desertification.

The HCM Group began greening activities in the Horqin Desert in 2004 after endorsing the mission of the Green Network, an NPO. The first 10-year plan was launched by Hitachi Construction Machinery (China) in 2004, and by the end of this plan in 2014 vegetation had been planted on some 100,000m2 of desert land. Later, the second 10-year plan began in 2015, with the goal of planting vegetation on 130,000m2 of land in a separate area of the Horqin Desert. Since the start of this plan, Hitachi Construction Machinery (China) has been planting vegetation together with dealers to meet this goal.

Over the many years of these activities we have built strong relationships with the local government and people. Local revitalization realized through these activities because of the involvement of local people in such work as fence building, planting and maintenance has also contributed to community development. Some wild green pheasants and fox can be seen again in the location where these activities first took place, indicating that biodiversity has been restored as well.

The HCM Group will continue to promote greening activities in the Horqin Desert in order to resolve regional environmental issues and to balance improved quality of life with sustainability. 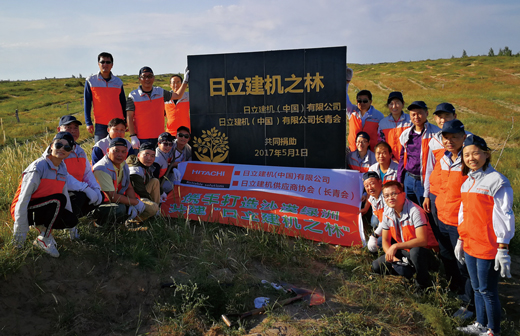